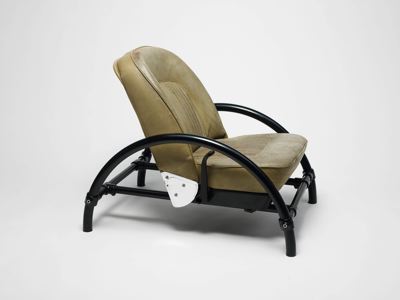 Throughout the 1980s and early 1990s, a cluster of industrial designers, including London-based Ron Arad, hungry for experimentation and inhibited by the economic climate in Europe, began exploring new methods and approaches to design problems. One of Arad’s most significant early works, this chair is made from a Rover 2000 car seat mounted on a frame of Kee Klamp scaffolding originally designed in the 1930s.

The design illustrates Arad’s preoccupation with experimentation and innovation, combining original and preexisting objects into inventive constructions with new uses in an effort to reawaken interest in these previously discarded materials and forms.

Manufacturer: One Off (British, founded 1979)